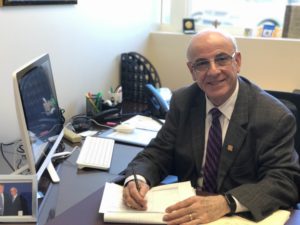 Joseph T. Kassab is born in 1952 in Telkaif-Nineveh; the heart of Christianity located in Northern Iraq. He grew up in a Chaldean Catholic family where he was taught the Aramaic-Chaldean language and traditions. Joseph is fluent in Arabic language since Telkaif is located in a dominantly Arab country with Arabic as its official language that is taught in schools. In 1979, Joseph joined his two brothers, a pharmacist and an engineer, in Rome, Italy Soon. In 1980, he arrived in the United States.

In 1975, Joseph earned his undergraduate degree with excellence from the University of Baghdad, College of Sciences, which qualified him for admission to graduate studies program at University of Baghdad, College of Medicine where he graduated first in his class with a Master of Biomedical Science (M.Sc.) degree in Medical Microbiology and Immunology in 1979. He earned his Master of Science degree under the auspices of the Royal College of Medicine of United Kingdom. Later at the same college, he was hired as an assistant professor. When he moved to the United States, Joseph continued his education to earn a Graduate Certificate (GC) in Community Education Leadership (IEL) in Washington, D.C. in addition to finishing an intensive curriculum in political sciences at Wayne State University in addition to concentrated participation in cutting edge Bio-Medical and Nanobiotechnoly research.

With having multiple degrees, Joseph has been an employee at various places which allowed him to gain a great amount of experience. Since 1993, he has been vice president at UniGlob Trading Inc. also the Innovative Cell Technology (ICT)Inc until today. In addition, he is Chief Science Officer at Nano Engineering & Consulting, L.L.C. (NEC) since he founded in 2007 and until today. Lastly, he has been an Executive Director at the Chaldean Federation of America (CFA) since 2005 to 2012. However, he has had various positions previously such as being a research assistant at The College of Science at the University of Baghdad while studying, an instructor at the College of Medicine at the same university later on while getting his Master’s Degree, and being Senior Biomedical Researcher and Instructor at the School of Medicine at Wayne State University for 27 years.

Joseph is recognized for his unwavering and passionate commitment to helping others by applying his knowledge and expertise to assist those in need. He has been on multiple missions overseas to provide humanitarian relief for ethno-religious communities such as the displaced Iraqi Christians and Yazidis, refugees, and all communities in that region who are displaced due to religious and ethnic wars. Joseph has met with various world leaders to spread awareness about plight of the Aramaic speaking Christians of Iraq including Pope John Paul II in November of 1992, President of Malta, 1994, Prime Minster of Turkey 2010, President George Bush in April of 2008, and Iraqi Prime Minister Al-Jafari in 2006 and Iraqi Prime Minister Al-Maliki in October of 2009, President of Iraqi Parliament 2010, Pope Francis in 2015, President Obama in 2014, and VP Biden in 2012. Joseph still puts effort until today and dedicates his time to plan more mission trips to the Middle East and provide assistance to the Iraqi Christians, other Internally Displaced People, and refugee families.

A- Some of the political and social organizations cofounded:

B- Membership and/or Board Member of the following:

With his education, knowledge, experience, and credentials, Joseph is a valuable asset as a member of many organizations, foundations, and councils:

Joseph is passionate about his career and has dedicated his life to it. He is always determined to help others and ensure everyone around him is in a safe and comfortable environment whether it’s at work, school, home, and everywhere else. As a result of such determination, he has received multiple awards for a variety of causes and accomplishments. From accomplishments, to humanitarian aid, to simply being friendly to work with, Joseph earned awards, recognition, and certificates of appreciation for multiple occasions. These awards highlight his work and remind us of his efforts to help the community. In 1992, he received Pope John Paul II Appreciation Certificate of :(Pledge of Heavenly Favours). In 2008, he received a Humanitarian of the Year Award from the Chaldean American Chamber of Commerce in addition to receiving the Austria Chancellor Gusenbauer Award (watch) in 2008 for helping the people of his country Iraq and surrounding war-torn regions. Another award Joseph prides himself on receiving is the Excellent Public Services Award – U.S. Census Promotion from the Chaldean Federation of America for spreading awareness and promoting diversity. He has received multiple letters of thank and appreciation from major U.S. Government Agencies, important religious international people, and well-known communities and organizations. Joseph has received awards for the past three and a half decades for his contributions to the community and he is still serving the community continuously which makes him eligible to receive more. Personal thank you letter for good humanitarian work from His Holiness Pope Frances date July 5, 2017. IARS-NP Initiative Conference in Beirut , Lebanon, September 2017

With his activities, services, and humanitarian work inspiring many individuals, Joseph’s work became the subject in many media outlets, newspapers, websites, and more platforms. His work became known in the community in The United States, and internationally.
He has been featured in multiple TV channels, newspapers, and websites such as Chaldean Detroit Times, American Jewish Community (www.ajc.org), Chaldean News Magazine, and Corner of Iraq in Detroit.
He has given a numerous amount of speeches to different types of audience. A couple key speeches of Joseph include his speech to the US Senate Press Conference regarding freedom for all Iraqis of different religions and ethnicities, his speech at Al-Mashriq Club regarding refugee and immigration issues, and his speech at Vienna Forum 2008 regarding The Plight of Iraqi Christians. He also provided consultation to various institutions such as UNHCR in Beirut, Lebanon, students of Wayne State University, Central Michigan University, and University of Michigan regarding The Plight of Iraqis as a part of the students’ thesis curriculum requirement. Much more is not listed here.

Privileged to work with and/or meet the following dignitaries:

I- The Holiness Popes:

St. John Paul, II (Vatican, more than once)
Benedict XVI (Vatican)
Francis (Reception at the White House 2016) and One-on-One at the Vatican ; May 2017